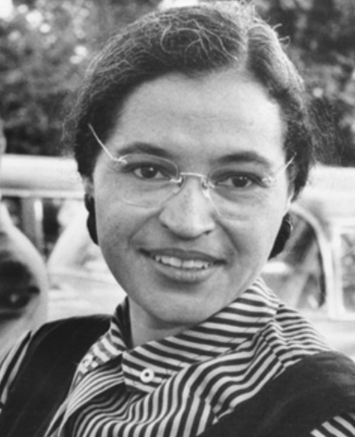 Who is Rosa Parks?

Rosa Parks was born on the 4th of February 1913, in Alabama, U.S. Her mother was a teacher and her father was a carpenter.

Why is Rosa Parks significant?

On the 1st of December 1955, after a long day at work, Rosa boarded the bus home and sat on the first row of seats intended for Black people. By the time the bus reached its third stop, all the ‘whites only’ seats were full. Rosa and three other Black people were sitting on the front row of the Black section of the bus. So, the white bus driver stepped back into the bus to tell Rosa and the three other Black people to move back to give their seats to the white people.

After being asked to move by the white bus driver, the other three Black people moved further back on the bus to give the white people their seats. But, Rosa moved to the side and not back. The driver told her that if she did not move back then he would call the police, and she told him to do just that… So he did.

The next day they set to work on a ‘bus boycott’ — where Black people would refuse to use any buses until the situation changed.

Eventually, the government noticed and finally laws were passed to remove segregation from buses. The boycott officially ended on 20th December 1956.

How is Rosa Parks Day celebrated?

Every year on her birthday, the 4th of February, we take a day to commemorate Rosa and the impact that she had on the Civil Rights Movement. She was an important figure when it came to the rights of Black Americans.